There are a variety of potential dangers campers face while living in wilderness areas. But while most of these dangers are relatively mundane – you may, for example, stumble and break an ankle or catch an illness from a mosquito not using a mosquito net – there is one potential danger that grips the minds of most who sleep outdoors: bears. But while many campers fear bears, they rarely represent as much of a threat as the average camper would think. That doesn’t mean you should ignore the possibility of a four-legged visitor at your campsite, but it is wise to keep it in a proper context so that you can make reasonable decisions regarding your safety.

Below, we’ll examine the bears that live in North America, dig into the numbers regarding bears and campers and provide a few strategies for avoiding conflicts while you are hanging out in their neck of the woods.

There are three basic types of bears that live in North America. Each exhibits its own unique physical and behavioral adaptations that help them to survive in the wild. These differences in biology and behavior also influence their interactions with humans, so campers are wise to learn about the different bears dwelling in North America’s habitats.

Black bears (Ursus americanus) are medium-sized bears that usually weigh between 100 and 500 pounds, depending on their sex, age and the time of year. They are generally covered in black fur (especially in the eastern portion of North America), but some individuals and populations can be brown, cinnamon or nearly white. Black bears are excellent climbers, who often retreat to the trees to forage or avoid dangers.

Although black bears are large animals, who can easily injure or kill an adult human, they are generally the shyest of the three species. Most black bears that venture into campsites are interested in obtaining an easy meal, and they are often easy to scare off by making loud sounds or throwing rocks. These facts are a blessing for campers, as black bear are the most commonly encountered bears in North America. Black bears inhabit a number of different portions of North America, including almost all of Canada, and most of the US, aside from the midwestern prairie states. They are also found in a few portions of Mexico.

Black bears primarily feed on a combination of berries, nuts, seeds, fallen fruit, insects, rodents, carrion and unfortunately, human garbage. However, they can and will kill and consume larger animals, including large birds, rabbits and deer, from time to time. 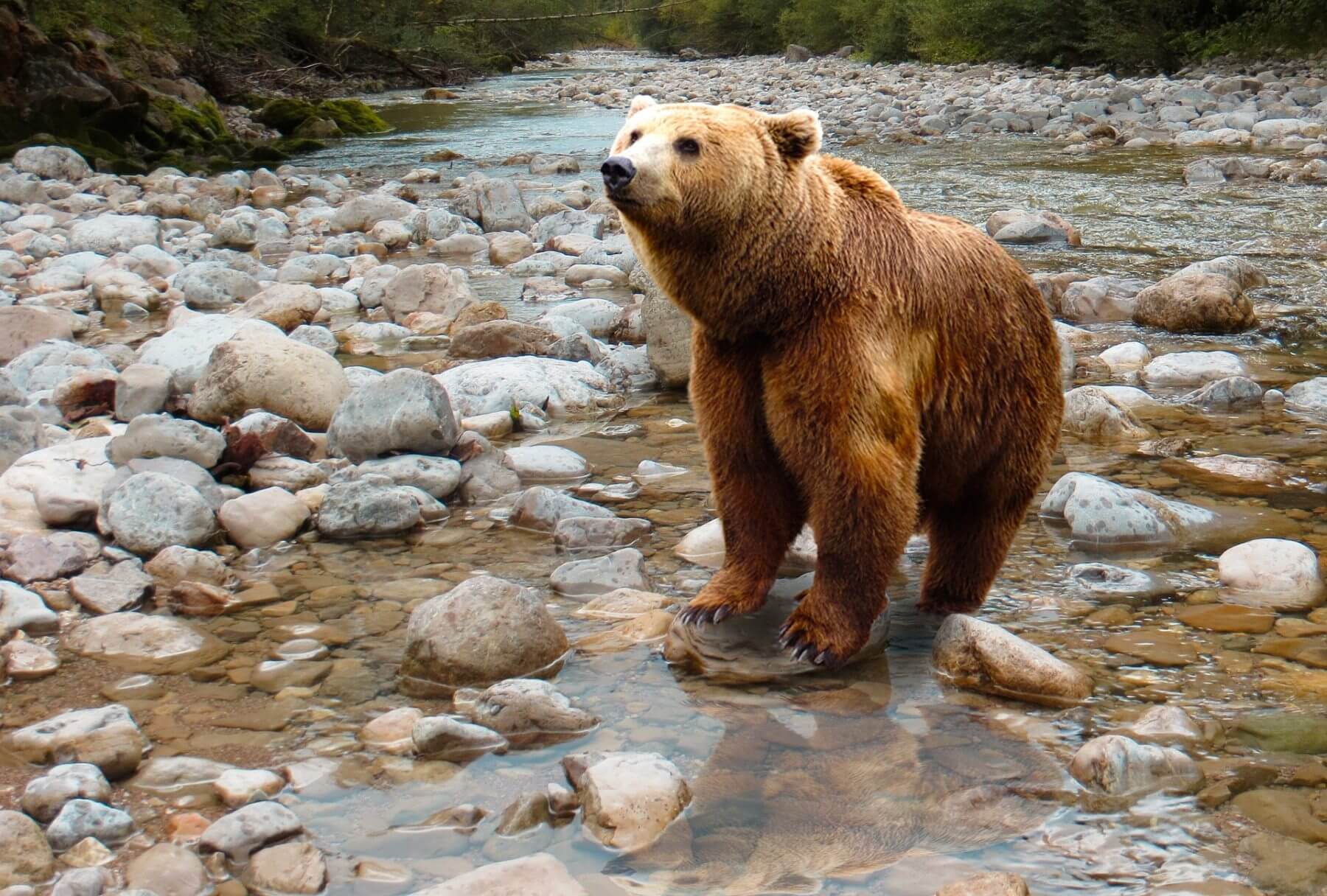 The infamous grizzly bear (Ursus arctos horribilis) is a subspecies of brown bear. However, as the only other brown bears in North America are found in Alaska, the names “brown bear” and “grizzly bear” are often used interchangeably. Nevertheless, most of what can be said of grizzly bears also applies to brown bears and vice versa.

Grizzly bears get much larger than black bears, and often exceed 700 pounds in weight. They are often bolder than black bears are, and are more likely to stand their ground and fight when threatened too. Many older references contend that grizzly bears cannot climb, but this does not appear to be true – but they are not skilled climbers and rarely venture into the trees.

Like black bears, grizzly bears are omnivores who subsist on a wide variety of food sources. This includes everything from plants, mushrooms and fruits to insects, rodents and fish (salmon are an especially important food source for some brown bear populations). However, grizzly bears also eat large animals, such as deer and moose.

It is likely that most of the large animals that are eaten by bears are found dead, rather than actively hunted, however, grizzly bears are quite capable of catching and killing just about any animal in North America or any US national parks aside from larger bears. Grizzly bears formerly ranged throughout most of the western United States, but in the modern world, they are largely restricted to Canada and Alaska. However, there are a few pocket populations in places like Wyoming, Montana and Idaho. While black bears and grizzly bears are omnivores who don’t often hunt large animals, polar bears are pure carnivores who routinely predate upon large animals – particularly seals. In fact, they are the world’s largest terrestrial carnivore, with occasional individuals exceeding 1,500 pounds in weight.

However, the term “terrestrial” is a little misleading when used to describe polar bears, as they are inextricably linked with and dependent on the Arctic seas bordering their habitats. Polar bears swim very well, and they spend a significant portion of their lives in the water. Their scientific name – Ursus maritimus – even alludes to this fact.

Fortunately for campers, you are unlikely to encounter polar bears in most popular camping destinations. They are only found in the northernmost reaches of Canada and Alaska, where the unthinkably low temperatures preclude normal camping activities. However, polar bears are rightly considered potential predators of humans, and any sightings should be treated very seriously. You may scare off a brown bear by yelling or intimidate a brown bear by traveling in a large group, but a hungry polar bear will rarely be denied a meal. High-powered firearms are the only reliable defense against such animals.

Since the turn of the millennium, a total of 29 people have been killed by bears in North America. Fifteen of these attacks occurred in Canada, and two occurred in Alaska. The rest occurred in scattered locations of the lower 48 states. This is not an insignificant number, but when you compare it to the number of campers that venture into wilderness areas each year – an estimated 40 million in the US alone – it becomes obvious that bear attack is a rare phenomenon.

It’s also helpful to compare the number of fatal bear attacks to other dangers, to get a sense of the relative risk they represent. For example, based on the statistics gathered in recent years, there are about three fatal bear attacks each year. By contrast, nearly 50 people die each year from bee and wasp stings, while more than 3,500 drown each year.

For that matter, nearly 50,000 people die in traffic accidents each year, which proves that you’re more likely to be killed before you even get to the trailhead than you are by a bear at your campsite.

While bears represent a very low statistical risk to campers, this will be of little comfort when you hear a black bear rummaging through your belongings outside your tent at night. Accordingly, you’ll want to embrace the following safety tips to give you the best chance of coming home in one piece.

Given the chance, most bears will avoid humans, so by chatting, singing or clapping your hands occasionally as you walk, you’ll avoid most encounters. Be especially careful to make noise when heading through dense woods or around blind corners.

This has been so thoroughly ingrained in the collective consciousness that it hardly needs to be said, but it is imperative that you don’t make a mother feel that her cubs are in danger. Even the shyest black bear can turn into a terrifying beast if she thinks you are a threat to her cubs.

In some places, bears commonly visit campgrounds in pursuit of an easy meal. While you may not be able to avoid such encounters, you can help ensure that the bear doesn’t walk through your campsite on the way to the food.

Historically, campers in bear country would suspend their food off the ground to keep it safe. However, this is difficult, and the bears in many areas have learned how to access these elevated treats. But most bear canisters will keep your food safe from bears, and they are very easy to use too.

While you’ll generally want to do everything you can to avoid close encounters with bears, bear spray (which is essentially super-charged pepper spray) can be effective for deterring bears that come a bit too close. Just be sure to consult the local ranger station before making your purchase and carrying it in your hiking daypack or duffle bag, to make sure that they aren’t prohibited at your camping site.

Although some authorities encourage you to just keep a low profile if you should see a grizzly bear, most will recommend scaring black bears away if possible. Loud noises usually do the trick, and by banging a couple of pots and pans together, you can create quite a bear-repelling racket.

Have you ever encountered a bear while out on the trail? We’d love to hear about it! Let us know the circumstances surrounding the encounter and your general location. We’d also welcome any bear-safety tips from experienced campers – your advice may very well help a fellow camper in the future.

Thank you Dave B. This helps.

Shut up Dave, no one cares about your bear encounters, stop bragging

Hey Jake, just stumbled on your website, enjoyed the bear article and bear spray video. My wife and I live in Santa Fe NM and enjoy hiking, biking and camping in the great American West. This summer we had the following bear observations:

1) On our bikes in Valles Caldera National Preserve (NM) – Sow & Cub come running from behind a hill across in front of us, roughly 200 feet away in an open meadow area, far enough away that momma bear didn’t feel we were threatening her cub. They continued in their direction and she looked over her shoulder at us a couple times to make sure we weren’t a threat. Close enough to be pretty exhilarating.
Didn’t have bear spray with us at hand on the bikes.

2) La Sal Mountains near Moab Utah in July – Big sow and two cubs (saw from road while in our car heading to our campground). I call this a “granny” spot since it was from the protection of our vehicle and anyone could have seen the same thing without being out there on the trail earning it.
3) Later that day in camp, literally no more than 30 feet away in our campsite – cinnamon colored young black bear who we learned from the camp host had been visiting camp because of sloppy campers over the previous couple weeks.
Camp host and us shouted, waived off the bear and never saw it again during our two nights there. Rangers, we learned, had used rubber bullets to try and move it out of the area. We kept our bear spray at close hand in our tent !
4) Not a bear but a Mountain lion the next day just below Mann’s Peak in the La Sal’s (roughly 12,000 elevation), about 3/8 mile away on opposite ridge. I was alone on a day hike and had never seen a mountain lion before, so it was pretty thrilling and a little scary. I had my bear spray with me and a hiking pole…bear spray as in mountain lion spray maybe.

In 2014 on Signal Mountain (Grand Teton) small black bear 50 feet away, dashes over my right shoulder. There and gone that fast, no threat. Didn’t have my bear spray at hand, was on my bike on a mountain road.

I have less FEAR after these wildlife spots (they’re not out to get us), but a greater sense of preparation in terms of bear spray, a pole to waive and “look big” etc).